Hi! It’s been one mount since I released Zeroes. I thing, now is the right time to look back and valorize what went well and what went wrong. I divide this postmortem to three sections. The first section is about development itself (prepare for lesson of history 🙂 ), the second is about numbers and charts, and I walk through all my successes and fails in last part. Introduction is over, let’s start with first part.

It started, after we finished our first game in Peord games. Peord games is “game studio” which my friends and I formed, when we studied high school. We was looking for new game to make. But we had problem. We really sucked in making graphic. Why do you think, that our first game was text adventure? But we had great idea. You can use photos to create point&click adventure. Plan was to take photos of Žatec’s old town and create dark atmospheric sort of detective game with daemon elements. It will not be so hard, because there are interesting places in this town part, like synagogue or old fortifications.

Why am I telling you that? It is simple. Because point&click adventure somehow transformed into puzzle game, in which was player’s goal to connect points on photos of old buildings. Connection by block with math operations was also one of considered possibility. But as you probably suspect, nothing was created. We moved to another projects. All that happened around year 2011, if I remember correctly. It could be normal story of many never created games. But idea for Zeroes was kept in drawer for further use.

I looked for new game to develop last summer, after we released so far our last game “Welcome to Ataria” in Peord games. I wanted to try Unity, because we was creating games in Game Maker. Unity has possibility to compile games for Android. And Android has Google Play, where you can get your game easily and to millions of potential players. It looked like good choice. I also wanted to try solo development, because we all from Peord games study university in that time and we have not enough time to fully cooperate.

When I was searching through my drawer with old ideas I founded base for Zeroes. It looked like game not so hard to make and it had idea, which I have never seen before. Only problem was graphic again. I discarded idea with photos and decided to create simple colorful abstract graphic. Somebody names this style “programmer’s graphic”. Yes, I agree with this name.

I started by creating first graphic concept in Inkscape. Funny is, that this file get by whole development. I can find out out of it, when I started. It was on 8th of August 2014. Plan was simple, to create functional game as fast as possible and get it on Google Play. First prototype was created fast, because I enjoyed its creation and I had holidays. Have I told you already, that it is almost impossible to make games during semester? 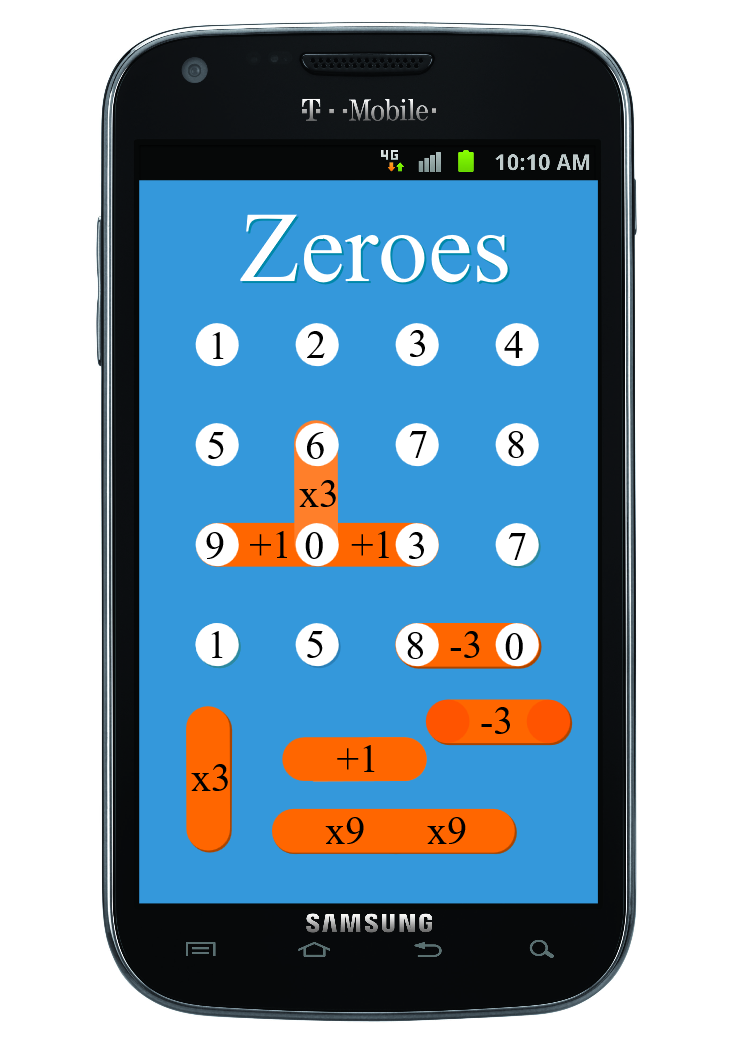 The first concept of Zeroes

Holidays ended of course and development had to switch to the second track. I was working on it mainly during free evenings and weekends. As you probably know, it slow development a lot. It looked like it is not moving forward sometimes.

One of few things, which I finished during semester was design of all levels. How did I create levels? On paper. I started with positions of dots. I found out, that maximal number of dots in level can be 4×4 (there is one exception in the last world). Than I added blocks between dots and selected operations for few of them. Than I added numbers for dots and operations for blocks again until result of all operations was zero.

Work returned to full speed after year again. Yes, another holidays was here. I had summer job, but I had still more time to develop the game than during semester. There was few things to finish. I had to add animations, sound and music, catch bugs and prepare for launch. As launch date I selected September, but work on Zeroes had to be finished until half of August. I was scoutmaster at summer camp last two weeks in August. It means no computer, no internet connection, no development and a lot of children to take care of. I was successful and almost all work was done before it. Only work, which I had to do was to create trailer and contact press.

I selected the 15th of September as release date. I created press kit before it. I considered presskit() by Rami Ismail. But I feel limited every time I used it. Why it wanted to put into it my telephone number? Why should I add team, which was working on game, when I developed it by myself? This is why I selected to create my own press kit.

Game was released at 15th of September. I had few days left, before my semester started again and ideas for new levels. So I decided to create update for the game. I have created two updates compared to plan. The first is called “Powers and Roots” and adds blocks with power and root operations. I created it in one week. The second is called “Modulo” and adds blocks with modulo operations. This one was created in record time of one weekend. It was tough, but I made it. Both of the updates brings new world into game, each with 20 new levels.

I was contacted by Budhi Tantra from playplayfun.com too. He offered me, that if I create version for web, he would promote the game at his site. I hoped, that I would be able to compile game into WebGL version, because it is supported by all browsers. But I get errors only. Errors like “Error 545684”. It really helps you to know, what is wrong. Main reason for such bad error messages is probably beta version of compilations. I compiled to Unity WebPlayer. I wasn’t painless, I had to recreate save system. It works now. If you don’t use Google Chrome you can play it here. Other browsers sadly announced few days ago, that they will not support WebPlayer too.

That was development history of Zeroes. Next part is more about business, number of users, DAU and MAU. Prepare for analyzes!