As you alredy know from prewious blog post, I created with my brother game Lethal Throw for 32nd Ludum Dare. Our game was competing in jam category against another 1468 games all around the world. It achieved 32nd place in innovation category and 54th place in fun category. It is huge success for me.I was not even hoping for such good results. Remember, it was my and my brother’s first Ludum Dare. My brother did’t finished any game before competition. And we finished it in 20 hours.  Down you can see whole results. 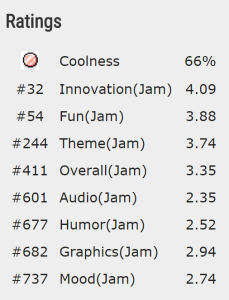 Results in Innovation and Fun are, as I said, great. Innovation and fun are probably the most important game’s attributes, and also ones you cannot easily change. They are solid foundation, on which you can build. Everything else can be changed.

I understand to the worst result (still only average) in mood category. We have no music in game, just sound effect. I thing that with some fast arcade music the result will be much better. Humor is also not so good. It has simple reason, we did not focus on it.

As you can see, I am satisfied. So we will be finishing the game. It would not be probably immediately, but not in the long time. It is because I already work on game called Zeroes. It is logical game with numbers for android phones. I will write about it in the next blog post.

What is in plan for improvement? Music as I have said already. And also annoying sound of dying bugs. Yes, it is really bad. I still don’t understand, why we picked it. We was really crazy when we was choosing. I also miss highscore, ideally online. But I am not sure, how to implement it. I will probably need server for storing scores or to use some online service. I know, that Google Play Game Services allows it, but it is Android only. Does anybody knows how to do it?

We would like to make more types of enemies. Not just redesign, but to make enemies with multiple types of AI, attacks and movement. Improvement of graphic and animations is obviousness. Better menu and settings are also on plan.

Final goal is to make fast arcade game with fights in arena. You will enter the arena, fight with enemies, clear arena and move to next one with tougher enemies again and again. Until you run out off lives, which we will also add. Current system, one hit and game over is not good. Yes, it will be inspired by The Binding of Isaac, but with more arcade feeling. By the way, I finally bought The Binding of Isaac and played it. It is good game. I was just surprised by aiming on arrow keys.

So that is it. I will definitely participate on some next Ludum Dare. It was great experience, and I enjoyed it. And last thing, I have to recommend you two Ludum Dare games. They are amazing. The first one is Blink Gun (http://ludumdare.com/compo/ludum-dare-32/?action=preview&uid=15279), puzzle platformer with special kind of weapon which enables you to switch places with black boxes. The second one is missls (http://ludumdare.com/compo/ludum-dare-32/?action=preview&uid=39872), local multiplayer game for up to three players, where you shoot missiles on each another and try to blow up others from planet.

Try Lethal Throw here https://dl.dropboxusercontent.com/u/19747618/HTML5/index.html if you have not tried it already. Or play it again!